Bulong is 32 km’s east of Kalgoorlie and was earlier known as the 25 mile or I.O.U. The town was gazetted in November 1895.

By 1900 the town had a number of Residential and Business Lots but a lot of homes were only hessian campsites. The town had 6 hotels, a hospital and a brewery at its peak in 1900 and one of the businessmen to settle here was PETER AUGUSTUS OHLSON.

Ohlson was born in Sweden and married Blanche Margaret Gardiner in Perth in January 1894.  He was living in Bulong in 1896 and Wises Post Office Directories stated he had an aerated water factory at the rapidly growing gold mining town of Bulong in 1897.

In 1902 a large congregation of people attended his factory in Reid Street to witness the starting of the first oil engine in the town. The Mayor commended Ohlson for sticking by the residents of the town in all the ups and downs and also being the owner of the first aerated water plant in Bulong.

In 1908 disaster struck when a summer storm damaged the factory and his house roof was blown off and all his contents ruined. However, this didn’t deter Ohlson and he is listed as living in Bulong until 1915.  In 1913 Ohlson’s wife Blanche owned a block of land behind the hall in Guildford. The Council wrote to her regarding purchasing this block as it was needed for public purposes and for her to put a price on it or they would possibly resume the block of land.

Peter Ohlson moved to Collins Street, Piccadilly in Kalgoorlie in 1916 and died here in 1920. His wife Blanche moved to Claremont where she passed away in 1943.

Peter Augustus Ohlson had several marble bottles measuring 180,195 and 220-225mm some with PA monogram in a circle and P A Ohlson, Cordial Maker, Bulong on the surface.

Other gentlemen connected to the aerated water industry in Bulong in 1897 were the following.

THOMAS FISHER. In the Post Office Directories his name is listed with “cool drinks” after his surname. He is still in Bulong in 1898/9 but no occupation is given. I have not found a reference to his connection to the A W industry.

PATRICK KIRBY. He is also listed with “cool drinks” after his name but I can’t find his name listed in this way in other years.

T PRATT. He has “cool drinks” after his name and no further reference to his involvement in the industry. 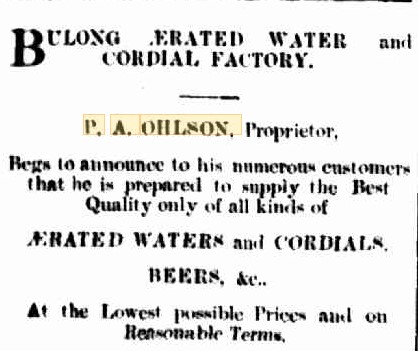