John Huxtable Wesley Peryman was born in 1837 at Brixham, Devon, England & arrived in Adelaide, South Australia with his parents about 1848.

He married Julia O’Sullivan on 28 Feb 1863 in Adelaide. He worked for the Bank of Adelaide at the time and was also involved with the S A Cavalry and was Captain of the Adelaide Rifle Association. About 1885 he moved to Quorn where he was a storekeeper and applied for a Colonial Wine License.

He was lured to the WA goldfields like a lot of men seeking their fortunes in the gold rush era, and by 1891 had inspected the Jubilee Gold Mine of Halls Creek in the Kimberley’s of WA for a South Australian Syndicate.

He was one of the first men on the Murchison goldfields when he walked from Geraldton to Nannine before making his way to Mt Magnet.

John was a resident of the Mt Magnet area by 1892.

His wife Julia passed away in 1896 aged 57 years. She was born in New York, a great loss to John and his son, John junior.

On 11 Feb 1897, he married widow Rosa Bucknall in Perth. She was the widow of F E Bucknall MP of South Australia. The couple settled in Mt Magnet where Peryman had mining and business interests.

He had introduced aerated waters to the residents in May 1897 and he also nominated as a candidate for the Legislative Assembly for the Electoral district. The Mt Magnet Brewery also advertised beer and stout for 10 shillings a dozen bottles at this time.

In August 1897 as proprietor of the Mt Magnet Brewery in Watson Street he invited the residents of the town and outlying areas to taste the “New Brew” delivered by the brewery. Everyone sat down to a meal and many toasts celebrated the new venture in town and the Mayor Mr J E Witherow also attended. Peryman gave a brief outline of his endeavours to make the business a welcome addition to the town.

In Jan 1898 Sparkling Ales brewed by the best water in the Murchison featured in his ads but in February a fire at Perymans Mt Magnet hotel caused a lot of damage.

May 1898, Alfred Joseph Pearn applied for a Publican General Licence for Peryman’s Golden Crown Hotel at Boogardie as he was now going to be the new licensee.

Rosa Peryman, his second wife had been ill for sometime and passed away in Nov 1899, so after only 2 ½ years of marriage, Peryman was a widower once again.

By 1899 John H W Peryman was 62 years old and the management of the brewery changed hands when P Bensberg became the new brewer and manager. However, his tenure had ceased by March and Peryman once again took control.

J H W Peryman had been at the helm of the Mt Magnet Hotel for about 8 years and in Jul 1900 Thomas Sampey formerly of the Queensland Hotel in Mt Magnet became the licensee and set about renovating the premises.

In Oct 1902 a Prospectus for the Mount Magnet Brewing Company Ltd was issued where John Huxtable Wesley Peryman was offered 2,000 shares at 1 pound each and the provisional directors of the proposed company the other part, with the object of a syndicate to acquire the premises and carry on the business of brewers, aerated waters and cordial manufacturers. Shares to the public were also offered.

A syndicate from Cue took over the brewery in 1903 and Mr W J Flanagan was appointed manager. Flanagan was unwell and died at the Court Hotel in Perth in June 1906. Mr E K Outrim from Cue was the new secretary from 29 Jan 1906 and commenced duties as the new manager in June with Mr H Parsons as the brewer. The business went ahead in leaps and bounds for some time, under the new leadership.

September 1907 management changed again when Mr W H Elliott from the well known brewing family from Victoria took control. He had brothers at Kookynie and Kanowna, who were also brewers.

In July 1908 Mr F W Brown moved from Cue to Mt Magnet as manager to allow Mr Elliott to concentrate on brewing and bottling.

Times were changing and the brewery was advertised for sale by the Chairman, Mr W J Heydon of Cue in November 1908.  It comprised all plant, casks, horses, carts and bottling plant. There was a well on the premises and immediate possession to the new owner.

A ditty about the brewery appeared in the Murchison Times & Day Dawn Gazette (Cue) on 3 Dec 1908 – Of all the beer upon this earth, The Magnet takes the cake, they drink it at Boogardie, Mt Magnet and The Lake. They want it up at Day Dawn & City Cue, at Nannine & at Abbotts they love this champion brew. The Magnet famous stout you’ll find in all the pubs. The praise of which all workers shout, so do the great big “bugs”. Bill Elliott is their brewer who to our hearts bring joy. Good hops and malt they always stock & best of men employ (Mt Magnet Brewing Co)

A Bailiff was called in to sell the company in June 1910. It was sold by auction to Peryman’s son, Mr Jack Peryman. By August it was working once again however, by December 1911 Mr J W Peryman advertised the business for sale and it included 10 hogshead plant, aerating bottling plant etc.

In March 1912 a new brew was on tap and under new management.

Harold F Parsons once the brewer and manager at the brewery who left to go to Geraldton and became a timekeeper on the railways, enlisted in WW1 and died in Oct 1917 whilst serving his country. He was aged about 35 years leaving a wife and child. 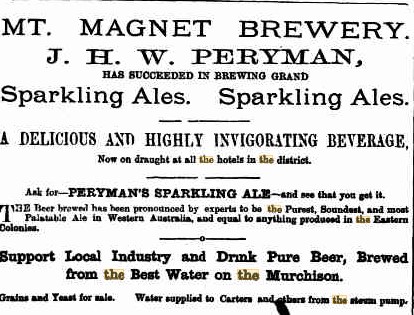