DAVID GEORGE WILLIAM DRYSDALE was born in 1904 in Zeehan, Tasmania. He married Ingrid Amelia Folland at Katanning in 1927 and in 1931 he was a Salesman living with his wife in Coburg, Victoria.

In 1932 David volunteered to be a missionary for the Salvation Army in the Kimberleys and he journeyed to Derby where the couple bought a caravan so they could tour the north for their work. He was settled in Derby in 1937 but he came back to Perth for a short time in 1943 where he was a bread carter.

In 1947 C G COLE began the Wyndham Aerated Water Factory and his first ad appeared in the Northern Times on 5 December. His ads stopped on 5 August 1948. He placed his factory up for sale on Lot 188 at the 3 Mile, on the corner of Wyndham and Baker streets. The plant had the capacity to produce 200 bottles per hour and the ad listed assorted bottles, essences, citric acid, a quantity of crown seals valued at 8 pound and ¾ ton of sugar, plus his house and furniture would be sold. His turnover was estimated at 960 pound per year. He would stay on for a week after the sale to help the new owner. David George William Drysdale bought this business and used the name Drysdales AeratedWater Works, 3 mile, Wyndham. His son OWEN DRYSDALE was now 22 years old and he was the manager for the business for his father. Their first ads appeared on 19 August 1948 and continued until 14 June 1951.  David Drysdale worked as a Technical Assistant at the Ord River experimental farm in 1949. In January 1952 Owen Drysdale worked for the Main Roads department and was stationed at Onslow for some time and in February 1952 he married Leila Mather In Perth. His father David had moved to Carnarvon in 1954 and was manager of Bridgeview Plantation. His son Owen worked for the Public Works Department at Wyndham and lived at the 3 mile, with his wife.  The Universal Business Directory lists Wyndham Aerated Water Factory in 1954 but does not state the name of the owner. In 1958 Owen Drysdale had moved to Shenton Park and was now a clerk. David and Ingrid Drysdale were in Katherine in the Northern Territory in 1963 where he was a market gardener. He eventually settled in Subiaco in 1968.  David died in 1984 and is buried with his wife Ingrid in Katherine Cemetery. She passed away in 1982. Ingrid was awarded a OAM in 1979, for her missionary services in the North of WA and the Northern Territory. Owen Drysdale lived in Mandurah in 1980. 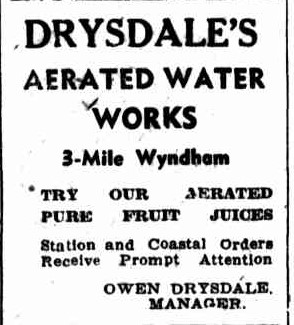