Albert Ernest Clark was born on the Isle of Wight, England in 1892. He was the youngest child of retired flour miller, Charles Frederick Clark’s, 10 children. In 1897 his eldest sister Annie Elizabeth Briden and her husband Harry arrived in Albany and after settling in Fremantle they journeyed to Port Hedland where daughter Ida Briden was born in 1901.

On 6 October 1911 Annie’s brother, Albert E Clark left Liverpool to travel to Australia. He was single and a watchmaker by trade. Sadly, Annie’s husband Harry Briden, was lost at sea off Port Hedland in a cyclone in March 1912, when he was travelling south on the “Koombana”.  In December 1912, Albert was in business in Port Hedland repairing, clocks, watches, jewellery and his advertisements noted he had 7 years’ experience in the trade in London.

By March 1915 he had established himself in Anderson street and had lots of items on view for customers of the town. However, the call of duty to his adopted country soon caused him to go to Blackboy Hill to join his countrymen in World War 1. He enlisted on 12 October 1916 and served until November 1919. Whilst in battle, news arrived to his sister Annie Briden that their brother Percy Clark born in 1883, had lost his life serving his country.

In December 1919 he resumed his duties as a watchmaker in the town. His business was situated next door to A H Wilson & Company.  In April 1920 he was acting signal man for the tides and light house keeper in place of Mr Thomas who had taken leave.

In May 1920 he married Agnes Mary Kent who he had met whilst on leave in England and she travelled to W A to join her future husband. Then he turned his hand to the Cordial trade. He became a barman at the Commercial Hotel and produced the drinks here, with his first advertisement appearing in the Pilbara Goldfields News, 23 Aug 1921. His last ad appeared in the paper on 26 September 1922. In reminiscing he mentions “he made soda water etc and sent the bottles to Marble Bar. The water used to come by railway trucks from Coongan, at the cost of 5 shillings per 100 gallons”. He continued to produce aerated waters until 1925. In 1926, M Pedlar was the aerated water manufacturer in town. Pedlar only operated for one year and then Geoffrey Paul Stocker commenced in 1927. Clark became the towns Lighthouse Keeper in 1926 and continued in this role for a number of years.

Albert Edward Clark was a man who gave his “all” for his adopted town and country. The Lighthouse keepers’ home, occupied by Clark, in Richardson Street Port Hedland, is on the Heritage Register. His many occupations include Light house keeper, signal man for the tides, Fisheries Inspector, Clerk of Courts, Registrar of Birth, Death & Marriages, Truck Driver, Watchmaker, Grave digger and Barman at the Commercial Hotel. The North West lost a very capable man when he retired. 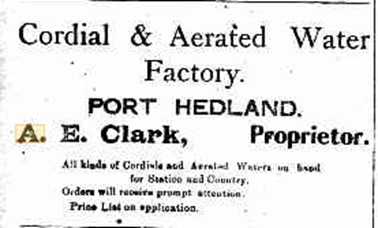