This treadle powered printing press, serial number 2169, was part of a batch of presses numbered 2163 to 2192 that were finished at the Golding factory on 31st October 1905 and has been dated from factory records1.  It is a hand-fed and foot-operated letterpress printing press, i.e. a printing press that prints from lead printers’ type onto a flat surface.  The item to be printed is placed on the platen on the left of the press and the type sits vertically opposite.  The round disc is covered with ink.  The treadle operates a crank which moves the rubber rollers up and down as well as opening and closing the press. The rubber rollers go up over the ink disc and on return spread the ink over the printers’ type.  As the rollers go up again over the ink disc, the platen closes, bringing the paper against the printers’ type and an impression is made.  On completion of the rotations, the press opens, the rollers move down over the type, inking it for the next impression, the printed paper removed and a fresh sheet inserted.  The process is then repeated. 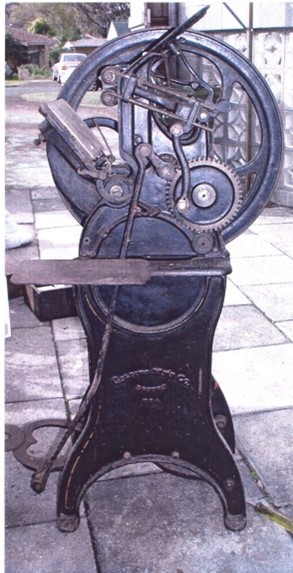 This printing press was purchased from Ron Dix whose grand-father started a printing company in Western Australia in the early 20th century.  The earliest advertisement found appeared on 20 April 1911 when the services of a “Boy” were required by Dix & Little, Practical Printers, Star Rink. 2

Percy Dix is believed to have been connected with G. H. McKenzie in a partnership at Fremantle before moving to Perth, leaving Arthur O’Keefe in charge of a branch office at Fremantle.   This partnership was dissolved and Percy Dix joined the Herald Print, which later went into liquidation.  Dix then entered into partnership with Ray Little and commenced operations at 900 Hay Street, Perth. 3 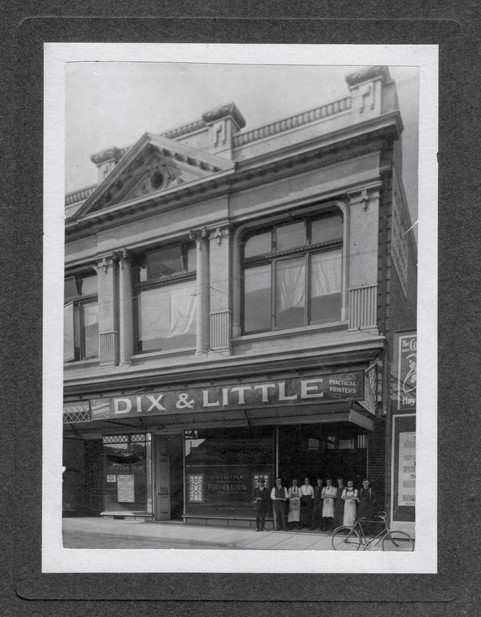 A notice that the partnership between Percy Dix and Ray Little was dissolved appeared in 1918 4 with Mr Dix continuing the business.  Dix Printing later moved to the corner of Milligan and Murray Streets (left).  Unfortunately the photo (right) taken at these premises does not depict the Golding Pearl press.5  Although the partnership with Mr Little had dissolved in 1918, the firm was still being referred to as Dix and Little as late as 1935 6 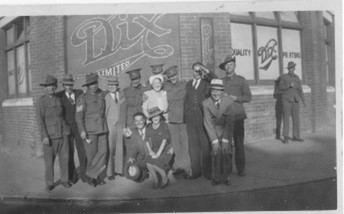 Clem Dix, eldest son of Percy Dix was active in the conduct of the business during its early years.  His death gave his son Ron (from whom this press was purchased), together with Percy’s remaining son, Reg, a closer control of the business7.  Percy Dix died in the 1950s. 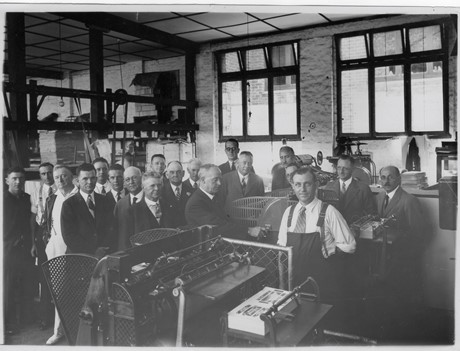 The Golding Company was started by William Golding in 1869 as The Printer Manufacturing Co in Boston, U.S.A. producing small seals, rubber stamps, hand type holders, printed and stamped labels.  It is understood that a catalogue of the period advised “we have Printing Presses and Outfits from $20 upwards.”  At this stage, the Company sold equipment manufactured by others.

For more details on the Golding Company, see the paper “1891 Golding Official No 4 Printing Press”

The Golding Company promoted the capabilities of the Pearl Press and depicted an illustration of the Pearl No 1 printing press in its 1881 catalogue.7

Golding made a number of different sized Pearl printing presses and numbered them accordingly.  All measurements are shown in Imperial sizes with the sign “ indicating inches.

In 1908 a Golding Pearl No. 1 printing press cost $70 (US) and took four revolutions to achieve one impression.  It is quoted as occupying a floor space of 27inches by 20inches, stood 50inches high and weighed 400lbs when boxed up.  The price included two cast rollers, extra set of roller cores, hand roller frame and ink plate, gages, two chases, wrench, and extended shaft for attaching steam fixtures, but did not include ink fountain, steam fixtures or counter.9 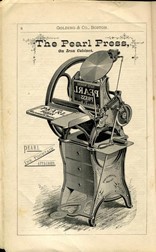